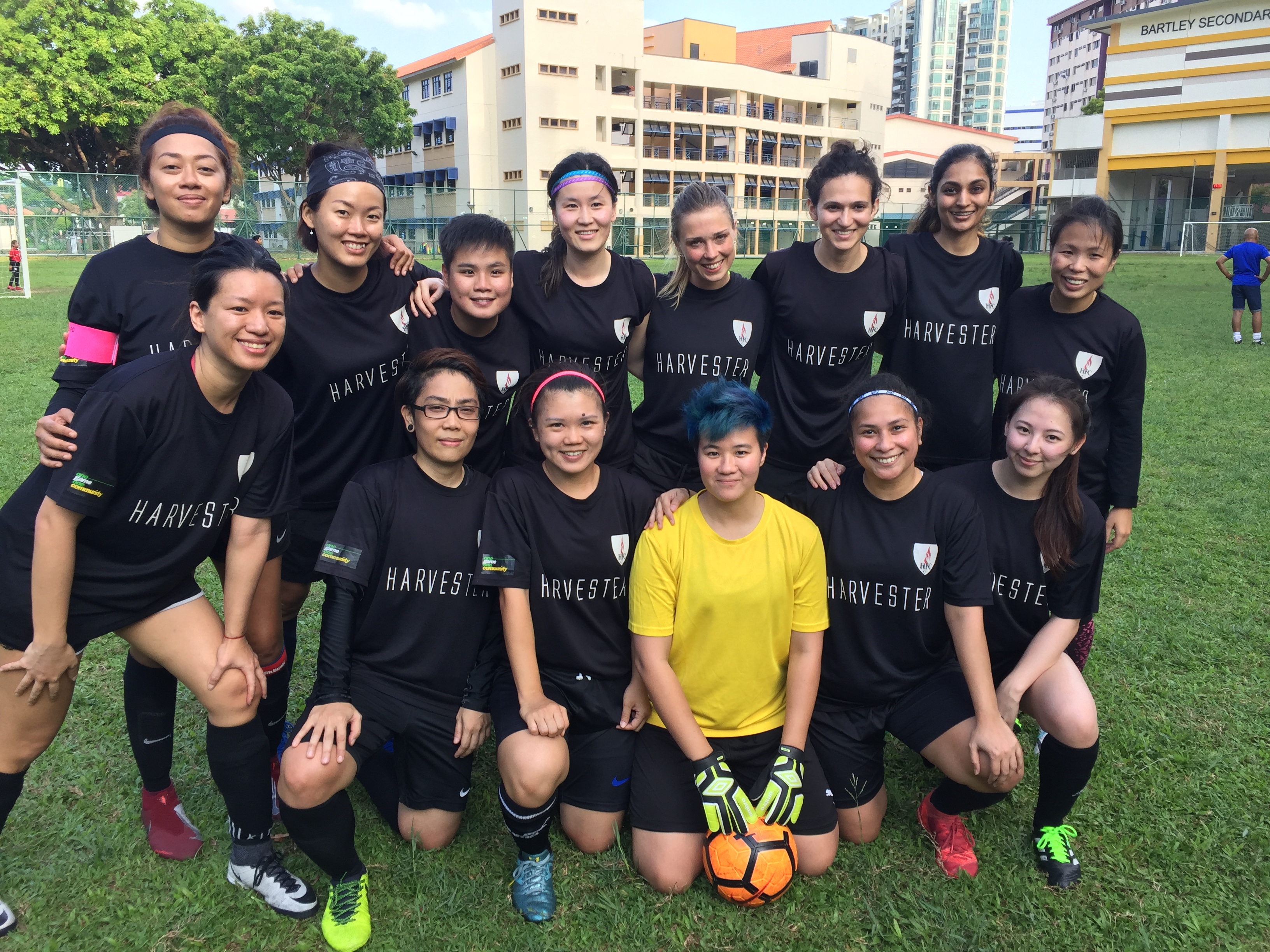 Almost two years since the chanced connection between Hilderinc Football Club and Munya Ahmed, the brave Aussie lass, who ignited the spark that has since grown into a beacon on a hill, the Hilderinc Ladies stepped into a new and exciting epoch when they played their first ever 11v11 match on Sunday.

Unimaginable when the Hilderincs started the project on 25th May 2017 with two attending a combined training session with the boys; this in itself was foresightedly set in motion in February 2017 when the Club revised their entire constitution during their Annual General Meeting to be one that was gender neutral, and was followed by the almost oracular arrival of Munya as their very first female player only two months later, the Ladies have since grown in leaps and bounds and has established themselves as key component of the Hilderinc Family.

After building the foundations in their Wednesday football sessions, and gaining exposure in the AFC/ FAS Women’s Day and the SMU La Diva tournaments, the Ladies took their maiden foray into competitive action in the D2D Women’s Futsal League, declaring with their passion that they were more than just making up numbers when they produced an impressive run in both league and cup editions of the competition.

And with the induction of three of the Ladies into the management committee of the Club this year, it was only natural that limits are challenged, and their debut in the full scale football match over the weekend was a perfect opportunity.

Playing against younger and nibble players from GDT Circuit FC, who added their name into the Hilderinc annals as the Ladies’ first ever opponents, the Blacks, many with no, limited or dated exposure to 11v11 football were defiant in the face of the youthful but well-drilled experience.

As raw exponents, the objectives were always to allow the team exposure to the transition from the accustomed futsal to 11-a-side football with all its elements, from size of the pitch, rules, positioning and most of all match fitness.

However, the valiant Ladies, though lacking in familiarity to the aforementioned, and especially in playing with each other as a team, produced a highly measured and impressive display with their confident pass and move football, a remarkable paralleling of their male counterparts in true Hilderinc tradition and spirit.

Despite seeing goals going against them, something they will certainly improve on as they develop and advance, the Hilderincs were full tilt, pursuing and challenging for every ball, even up to the final minute, sight that would leave many menfolk who play the game embarrassed.

While the whole occasion was a celebratory first and all those involved will become Club legends, honourable mention of the first ever goal scorer for the Hilderinc Ladies goes to Erika Nordlund, who capped an outstanding game in the middle of park with a well-taken penalty, and equally noteworthy was the Ladies’ first ever yellow card which went to Amanda Ng, who add a little spice to the proceeding with a benign infringement.

Whatever shape or form the Hilderinc Ladies’ journey takes from hereon, it was a massively proud moment for the Club who have seen them, collectively with the others who did not played on Sunday, put in an average three days a week in Monday trainings, Tuesday/ Saturday games, Wednesday football sessions, playing even on public holidays, before and after important meetings or personal engagements, with injuries and travelling from all parts of the island to be part of the growing, exciting and formidable gang.

Now nursing knocks, bruises and sore muscles after their historic day, the Hilderinc Ladies will be ready for their next game, because the adventure as just began!