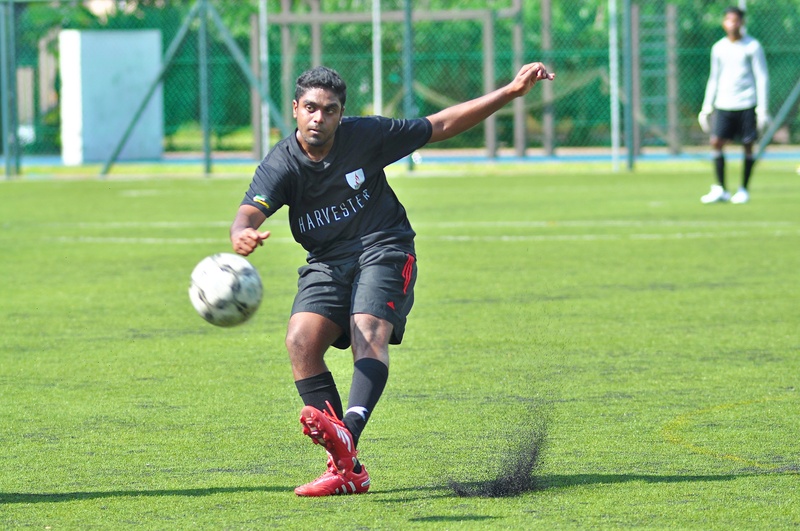 If it was a less than desired second half performance from Hilderinc FC last week, it was one of the most tepid starts from the Blacks this time around as they geared up to return to league duties with a friendly game against Mavericks FC at Naval Base Secondary School.

Apart from the rarest weather reprieve they have ever had whenever they played in Yishun, it was a half to forget, as the Blacks looked disjointed and lackadaisical for most parts, though the occasion prompt of their potentially deadly self was fleeting even against an opponent who did little to impress apart from blunt incursion, which caused minimum bother for a backline, which were spared the quandary by the late addition of Glenn Sandhu and the willingness of Nabil Zahrif, after a couple of no-shows threaten to obviate planned objectives.

It was then that the Hilderincs were given a genuine reason for utmost annoyance at themselves after they were penalised with a penalty after one of the most blatant foul a player can commit inside the 18-yard box, resulting in an unnecessary goal for an otherwise uningenious Mavericks.

The half-time break provided an opportunity for refocus, and with a slightest tactical adjustable, the Hilderincs started the second period a different proposition.

Reverting to the usual passing football, the Blacks were level within three minutes of the restart after Kumaresan Maniam floated in a delightful ball for Logaraj Sundram to head it into goal for the equaliser.

Not done by the early response, it took the Hilderincs an incredible 11 seconds from the resumption of play to take the lead after Ian Morris robbed former Blacks’ midfield general, Andrew Bai, before laying off to Cristian Peligros to smash in the lead.

Turning the game on its heed, the Blacks were inches from extending their lead when Logaraj Sundram’s class volley flew pass the face of the goal, after being picked by Cristian.

However, the renewed initiative took a dent when Andrew Bai leveled from distance, making up for his earlier mistake, but it was more of the Hilderincs failing to give due attention to the threat.

The infuriation was doubled just moments later when the Hilderincs conceded a carbon copy of the goal, failing again to deal with an inoffensive threat instead of reacting to the damage.

Unlike the first period, the Blacks were in for the fight, and with the front three pressing high, the momentum was with the Hilderincs and they constantly probed and prodded the opponents for the breakthrough.

And it finally arrived after Ian Morris taking a quick throw-in to Cristian Peligros, watched the forward smashed it his second and the Hilderincs third to bring the game into parity.

While a draw proved to be somewhat a fair result, the Blacks resurgence in the second half should have won them the game, had they paid that little more attention in their own half.

Though performances like the first half’s would be catastrophic against Hibernians Athletics next week in the league, the Hilderincs will be fully aware that they have to turn up with a focused and determined mind to keep their campaign on track.