Seventh Heaven For Blacks In Friendly 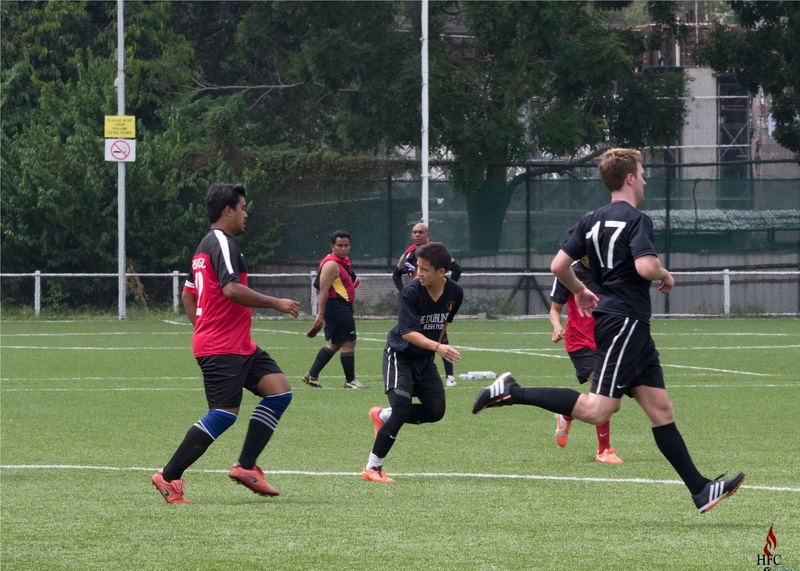 With a three week break in between the top of the table clash against Singapore Panthers FC, Hilderinc FC occupied themselves with warm-up against old foes, Royals FC in an ESPZEN friendly game.

A coming together of rivals of yesteryear, when many a closely and intensely fought encounters were a hallmark, both teams, on the contrary took this occasion to get acquainted in a less competitive atmosphere.

Having said that, there was neither any suggestion that it would be a stroll in the park for either outfit, as the niceties were reserved for post-match once the game commenced.

The Blacks eager to take the opportunity to try out variations, handed debuts to Denis Lobov and David Finch, along with a starting berth for Jack Fleet, who was returning to the fold after a long absence.

Confidence in the welcomed return by Lim Yong Kiat in goal, permitted Nick O’Sullivan to move into his maiden tenure in the midfield along with Ted Kaneda, allowing the usual defensive quartet to feature Russian Denis Lobov.

Early exchanges were tentative as both sides choose to keep hold of the ball when in possession, instead of the launching into immediate frays into each other’s half, though the Blacks were faster of the blocks, teasing the opponents with attempts of a breakthrough.

Pressing high up the pitch and working the ball into attack from the backline, the Hilderincs were at the usual best, taking charge of the game as the minutes progressed.

However, it was the Royals who were first to test the efficiency of the Blacks’ defence but were only given a sniff as they were duly resisted.

Normal service was resumed at the ninth minute mark when Jonny Hill’s long range cross was brought down with poise and finished with equal vanity by Gabir Nabil to put the Blacks in front.

Ninety seconds was all it took for the Egyptian to extend the lead when he robbed a Royals defender en route to find the back of the net for his fourth goal in two games, justifying his stature.

The Hilderincs increased their lead further when Nick O’Sullivan, from another quick counterattack launched from defence, split the Royals’ backline with a weighted ball to David Finch, who had looked to have taken to ball too far out but showed great audacity to score from an acute angle.

Breaking the Royals’ resolve with their flowing football, the Blacks were in a threatening mood to overrun any bulwark by the time the referee called for the interval break.

Relentless in their pursuit, the Hilderincs came close with efforts from Gabir Nabil, Ted Kaneda, Nick O’Sullivan, Ian Morris and Jack Fleet, amongst others before Alex Wong made it four with a goal of the game contender, though the panel would spend more time deliberating if he had indeed intended the outcome.

Presiding over a freekick 30 yards out, the fullback curled in a shot and the flight of the ball deceived goalkeeper as it bounced in front of him and into goal, much to the glee and delight of the Blacks.

The next ten minutes were spent in reaffirming their dominance as the tie looked to be over in first thirty minutes, or rather in a twenty minute spell when the Hilderincs scored four times.

Resisting the temptation to make mass changes, the Blacks introduced Sashikumar Mahathevan and Jonathon Mok, along with Mitchell Keh, who was brought on in the closing minutes of the first period.

If the Royals had any game plan for a fight back, it was laid in tatters when Hilderinc FC scored right from the restart.

Livewire Mitchell Keh, hunting down the kickoff, laid off a quick pass into the path of David Finch, who coolly slotted for his brace, even before the opponents had their laces done.

It was Mitchell who again was at the start of the Blacks’ sixth when his blistering run into the box drew the goalkeeper out and with his momentum taking him jolly venturing up field, ran into trouble after being intercepted by Jonathon Mok, who seeing the goal unattended, decided to have a go from distance.

With the ball heading into an empty net, Max Yeong of Royals denied it with his hands, prompting a straight red card from the referee, who was bound by the letter of the law.

However, in a show of sportsmanship in tune of the friendly, urged onto by several Hilderincs to reconsider the decision, the man in the middle relented and allowed the offender to return to the pitch.

The Blacks’ graciousness was nearly overextended by skipper Ian Morris whose atrocious penalty was saved by the keeper, but the veteran somehow made amends by stabbing in for a goal from the resultant melee to save himself from stick for missing his second spot kick in as many games, albeit both in another friendlies; but for his misdemeanour, was immediately substituted by an irritated Jeevan.

Having a commanding game the Blacks showed their versatility by changing formations seamlessly, while bringing on Dan Koh, Chan Yuxuan and Takashi Ito, who had missed a vast potion of the season due to his work commitments.

Royals FC, though crashed, did well to profit from a rare lapse by the Hilderincs to pull a goal back but that was the least they were given as they Blacks completed the rout with their seventh and final goal of the game.

Alex Wong’s pass into the danger area was deft touched by Mitchell Keh to David Finch, who sealed his hat trick on his debut with ease.

The scoreline, while it reflected the Blacks’ dominance, could have been even greater, had Mitchell Keh and Sashikumar Mahathevan joined in the scoring party, with both hitmen coming close, especially with the latter smacking the upright early in the second half.

On a day when the league results of Hilderincs’ closest rivals did them favours, the Blacks know that with the others’ games in hand, it is imperative that they get maximum points out of their last two games, starting with the top of the table encounter with the current league leaders and the reigning Champions, when they return to action on 10th May 2015.