Hilderincs Snatch Win At The Death 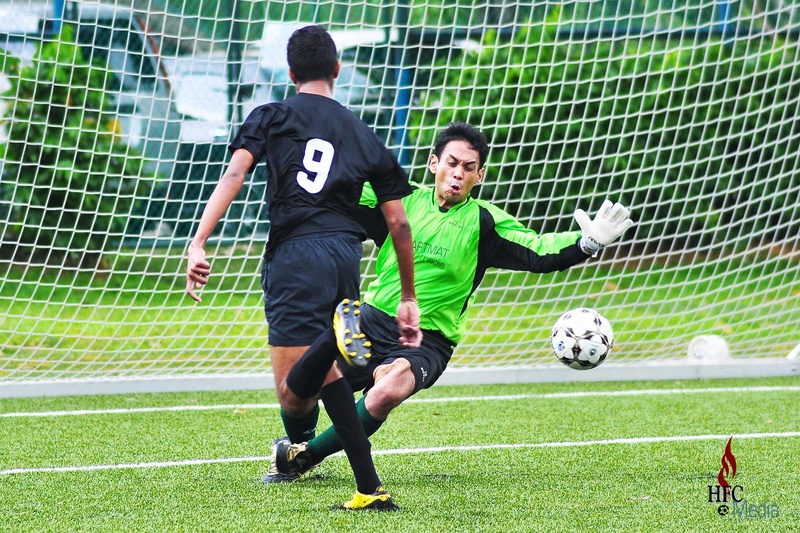 After last week’s schooling in playing competitive in a reduced pitch, Hilderinc FC fought out a thrilling game against F10 Football, coming tops with a last grasp winner.

Though the primary purpose for the 7s may have been for midweek working out in benefit of the Blacks’ weekend league teams, there could be a possible evolution in its own right, though for majority of the players, it is still a slow transition from the 11s, especially after having made to play with a size 4 ball as ESPZEN refined the rules.

Having suffered heavy defeats in the first two games, the Hilderincs were keen to avoid a similar repeat and were off to a quick start with Ian Morris testing the F10 keeper in the opening minute.

However, the game descended into a fast paced tit for tat account, with both teams cancelling each other in the middle of the pitch, though Sunny Tharidu in goal, had to be more alert than planned as F10 tested him quickly taken shots, but the stand-in goalkeeper was more than apt for such tease.

It was not until the half way point that the Blacks began to assert themselves in the attacking third with the introduction of Rayan “Doc” Mukhtar, and later Aldrin Julio.

Hence it was not surprise that the two would have a say with the Blacks’ opener when Aldrin found the former in space for a clinical stab into the back of the net.

Following a sustained phase of pressure, the Hilderincs extended their lead with a well taken shot by the Doc, who was certainly making an impression on his long waited return.

Though the Blacks were two up at the break, it was no walk in the park, as the Blacks’ backline had to be at its best against an active opponent.

While the restart followed a similar pattern, F10 Football staged a sterling comeback when they hit back with two quick goals against the run of play, the second of which was as a result of uncomfortable handling of the smaller than usual sized ball by Sunny Tharidu, who inadvertently dropped it for the F10 forward to score.

But, it was the defender turned keeper who kept the Blacks in the game with his heroic saves, as he almost single-handedly denied an overturn of fortunes.

With time ticking away, the Hilderincs threw caution to the wind and poured forward for the winner.

And they almost thought the most unlikeliest person had given them the lead when Kavin Singh, found himself in front of goal, as he swore that his thundering header from a Edgar Cascan cross had beaten the F10 keeper, however, against all laws of physics, the custodian pulled off an incredible save to deny the veteran a rare goal.

However, the Blacks, with just two minutes remaining on the clock, snatched all three points when another Edgar Cascan’s prefect cross was thumped into the back of the net from close range by Ian Morris for a hard fought winner.

Though not accomplished, the Hilderincs had a well-worked sparring session in keeping with their overarching ambitions.