Keeper Scores In Blacks' Top of the Table Blockbuster Win 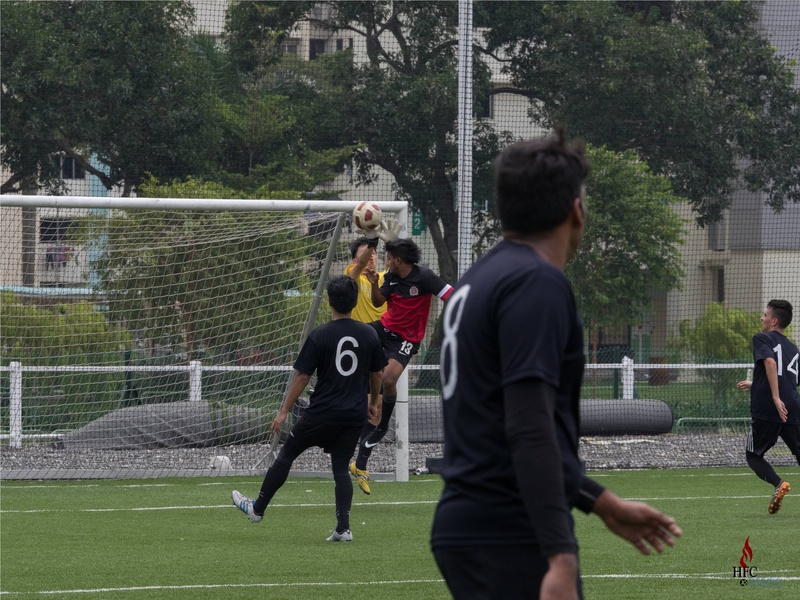 If the past encounters between the Hilderincs and Singapore Panthers were any indication of the quality of football being played by these two rivals, very few amongst the neutrals were left disappointed, as both played out a riveting contest, with the Blacks producing an astute display to come on tops.

The stakes were upper for this clash as both the Blacks and last season’s champions, Panthers were challenging head to head for the ESPZEN Sunday League 22 Division 5 crown this campaign.

For the Hilderincs, league leaders for much of this season, it was a must win game if they had any remote chance of wrestling the title from the Champions, who have four games in hand and were only a point behind the Blacks at the start of the day.

It was therefore, highly imperative that the Blacks gained maximum points from their remaining two games, starting with the Panthers, if they were to hang on to a slim chance of at least a top two finish, especially with a host of teams on their coat tails as well.

Despite missing several in rank, the Blacks were well stocked for the task at hand, however within a twelve hour period, the numbers were affected by late withdrawals, threatening an uncomfortable afternoon in the heat of the day against a tough opponent.

As a saving grace, the Blacks were given a boost in the eleventh hour when David Finch was cleared from his league bow after netting a hat-trick in a sterling debut three weeks ago in a friendly.

With Sunny Tharidu making his return to the side after a long absence due to his matrimony, the new groom was paired with Jonathon Mok in the heart of the midfield, fuelling the attacking quartet of Gabir Nabil, David Finch, Mitchell Keh and Ian Morris, with the tried and tested backline of Nick O’Sullivan, Nicholas Ledenmark, Alex Wong, David Zheng and keeper Leon Lee, anchoring the side.

The Blacks started in their usual press high and create from the back football, with the game plan thoroughly directed into the grain.

It took the Hilderincs a mere ninety seconds to signal their intent when hotshot Gabir Nabil opened the scoring with well taken shot from range to put the Blacks into the lead.

The Blacks were in good form going forward, threatening with their persistence and industry, working well all around the pitch, nearly adding a second only for the upright to deny Gabir Nabil a quick brace.

Working their way around the Hilderinc harassment, the Panthers slowly came to their own, levelling the playing field, as both teams squared off on equal footing.

A finely taken goal brought the Panthers back into the game, when keeper Leon Lee found no answers to a top left corner curler, though the young keeper produced a couple of fine saves prior to the equaliser.

An unfortunate handball by Nick O’Sullivan was penalised by the referee, who while sympathised with the defender’s slip before the ball hit his flailing arm, stuck to the letter of the law, pointing to the spot.

A penalty of the highest order by Singapore Panthers’ Samba left the Blacks trailing, giving a moment of reflection for the Hilderincs as they sought a way back after having taken the game and lead against a formidable opponent.

Both side spent the next fifteen minutes in the middle of the park, trying to outdo each other with their work rate.

The key moment of the game came on the half hour mark when Blacks’ custodian, Leon Lee, who has been earning rave plaudits, turned the tie on its head when he cemented his name in the Hilderinc folklore by becoming only the second goalkeeper to score from open play, when he launched a huge kick from his own box, and finding the back of the net directly from it, to the elation of the home side.

With their keeper’s goal working as a catalyst, the Blacks response was immediate, stunning the Panthers in the process.

Within a minute of equalising, the Hilderincs were back in front through Gabir Nabil who reacted with great composure to score his brace after his initial shot was parried away.

Still coming to terms of a quick turnaround of fortune, the Panthers tried to get back into the game and nearly did so, if not for the agility of the man of the moment, keeper Leon Lee, who produced an outstanding fingertip save to prevent a certain goal.

However, it was the Hilderincs who benefited from the Panthers’ corner when they counterattacked in merciless fashion, extending their lead through Logaraj Sundram who pounced on a delightful David Finch cross, with virtually the last kick before the break.

After the exertions of an amazing half, in which they were breath-taking, the Hilderincs, in view of the weather and the limited positional resources available, especially with a thin midfield option, changed their formation altogether.

Playing three at the back, the Blacks involved Mitchell Keh and Logaraj Sundram in wingback roles with forward Sashikumar Mahathevan deployed as a surprise midfielder.

Despite the seemingly eccentric approach, the Hilderincs, in their new setup were spotless as they came up tops against the Panthers who were looking for a second half reaction.

Predicting and consequently countering their opponents’ response, the Blacks, with the presence of Sashikumar in midfield working wonders, broke up the Panthers at every department of the pitch, adding frustration to their concerns of suffering successive defeats.

With improvised wingbacks, Mitchell Keh and Logaraj Sundram in exceptional partnership with a compact core, the likes of Nick O’Sullivan and Alex Wong were freed to set up attacking initiative from their own half.

Industrious David Finch, who had been involved in pretty much all of the Blacks’ attack, finally got himself on the scoresheet when the finished with poise after receiving a headed assist from Ian Morris.

The game was wrapped up by Jonathon Mok, who was the heartbeat in the middle of the park when he followed up on his own shot, which rebounded off the upright to score and seal the priceless win for the Blacks.

With Dan Koh and David Zheng added into the midfield mix with near perfection, keeper Lim Yong Kiat relished his outfield venture, almost turned provider to the enjoyment of those in the stands.

Though the Panthers pulled a goal back late in the game, it was nothing more than a consolation as the Hilderincs pulling off a stunning win.

While any title prospect is still not within their own control, the Blacks have set themselves well, with one more game left in their season, to stay in the hunt nonetheless.

Note: Hilderinc Football Club wishes to thank Singapore Panthers FC’s manager, Kevin Matthews for his gracious assistance to us before kickoff, highlighting the fact that while competitive edge is necessary, the spirit of friendship which comes through the Beautiful Game supersedes any inessential rivalry.