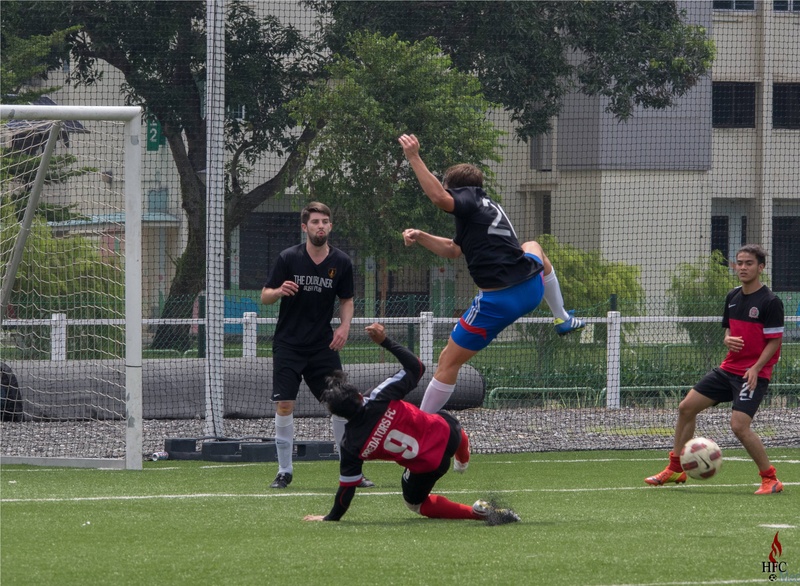 A shrunken and option-less Hilderinc FC side ended their five match unbeaten run when they lost 2-1 to their rivals, Smartmat FC, in their first defeat of 2015 in the ESPZEN Sunday League.

Playing away from their home ground for the first time this year, the Blacks, without a recognised midfield and a makeshift defence, had to their work cut even before kickoff when Lim Yong Kiat and Shuichi Narita pulled out due illness and injury, while a no show from Sai Ganesh, left the team wafer thin for what is an unofficial derby between these two opponents.

Player limitations meant that fullback Jonny Hill was moved into a three-man defence with midfielders, David Zheng and Chua Yuxuan, plying as wingbacks, while Azman Azmi, Guy Heskins and Ian Morris fitted into an improvised midfield, leaving all six playing out of their natural positions.

History of this fixture down the years always has had results contrary to the form guide and with the restrictions imposed on them, the Blacks took on an unenthusiastic approach, content to invite attention whilst breaking on the counter.

While the early exchanges were placid, there was a sense of Hilderinc reticence as they came to terms with the heat and an intrusive opponent.

As the minutes progressed, the patched up Blacks grew in confidence in their defensive duties, holding well against any attempts to penetrate them.

Even the midfield duo of Azman Azmi and Guy Heskins were admirable in their provisional roles, complimented by livewire, Mitchell Keh, as he snapped away eagerly, making life uncomfortable for the Smartmat backline.

It was no surprise than that the first real chance of the game fell to the Blacks when the nippy forward’s pressure allowed the ball to find Sashikumar Mahathevan in the box, but the striker’s shot was narrowly turned around the post by the Smartmat FC goalkeeper.

Now controlling the pace of the game, and limiting the opponents to occasional fray into their half, the Blacks did have the ball in the back of the net midway through the first period.

Jeevan, whose cheeky attempt to turn the ball in with his arm from a Mitchell Keh freekick failed to win the approval of the referee who spotted the blatant handball, and duly showed the veteran defender a yellow card for his troubles.

With the game evenly poised and the Blacks in good command, one moment of lapse undid all the good work.

Under no pressure, the ball was chosen to be played into the middle of the pitch, allowing an interception by the Smartmat forward, who in turn was brought down by Jeevan for a freekick, for which the defender was fortunate to remain on the pitch.

Having had not much to do up to that point, young keeper Leon Lee had to pick the ball out of the net after he was beaten by a well taken freekick, which put Smartmat head against the run of play, but most importantly as a result of an avoidable mistake just before the break.

Seeking to regain the lost initiative, the Hilderincs brought on Logaraj Sundram for Jeevan, who was forced to forgo his ankle rehabilitation timeline due the Blacks lack of options.

Chasing the game, the Hilderincs poured forward whenever they had possession of the ball, though leaving themselves venerable to counterattacks; however, they dealt with them with effectively as a collective unit, led by an impressive backline.

Yet, the task was made harder when they were forced into a change when Azman Azmi, picking an ankle injury was replaced by Nicolas Scribe, adding to the theme of players playing out of their usual position, though the German went on to perform excellently as an emergency central midfielder.

However, it left the Blacks, already on a limited bench, with only one fit player in Melvin Ng; as both Jeevan and Azman Azmi unable to further contribute to the game; and that deficiency was to play a major part as the game wore on.

Speculative chances were created at both ends but the Smartmat keeper, having denied Sashikumar Mahathevan in the first half, proved to be the Blacks’ the obstacle in the second when he singlehandedly kept them at bay with at least two fingertip saves.

First from Mitchell Keh, went he tipped over an audacious attempt from an acute angle from the forward and next from a tricky freekick from Ian Morris, both were certain goals, if not for the custodian’s heroics.

While the game was finely balanced, the size of the squad proved to be the telling difference, especially when the heat started to take its toll on the Blacks, who wished they had the luxury of their opponents, who kept refreshing their personnel.

Earlier saves from the Smartmat keeper proved vital as against the run of play, yet again, the Blacks found themselves two goals down when a speculative long range shot added to their deficit.

Two goals down, it could have been all over for the Blacks if not for David Zheng’s goal saving block, which kept the Hilderincs in the game with a slender hope of a comeback against the odds.

With seven minutes remaining on the clock, the Blacks staged a sterling attempt at a comeback when Jonny Hill smashed in a thunder bolt from distance after an intelligent cornerkick by Ian Morris and Mitchell Keh send the ball his way.

Memories of the earlier fixture between these two games played in the minds of both teams, when the Hilderincs came back from two goals down to draw 3-3 and the Blacks very nearly completed another comeback with the last kick of the game when Mitchell Keh was inches away from turning in Guy Heskins’ cross.

Considering the circumstances, the Hilderincs did perform beyond their limitations, though it is an undeniable fact that the lack of numbers and options did stifle them.

The Blacks will now return to their home ground from now till the end of the season and will ensure that they will not allow another slip up to deter them again as their keep focus on the Division 5 title challenge.